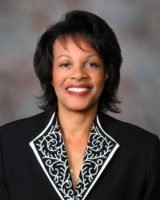 Veda McNair, known around Spring Creek High School as “The Main Thing Lady” because she encourages her Success Coach students to keep education as “the main thing” in their lives, often suggests the community college as an option for students after graduation. McNair has been employed in the education field for more than 40 years. A former elementary school principal, McNair says she often runs into students she knew growing up in the schools where she was principal. Many former students would often tell her that Wayne Community College had played a large part of their education beyond high school. This is when her interest in community colleges began. Therefore, in 2005, when McNair was asked to serve on Wayne Community College’s Board of Trustees, she was more than happy to oblige.

McNair said that being on Wayne Community College’s board has allowed her to see “the other side” of community colleges—not just how they educate their communities. Being a trustee has shown her how community colleges partner with local businesses, school systems, military bases, and communities. It’s also shown her how the colleges can affect local economies and economic development. “When I see [these] partnerships, I feel a sense of pride that I’m a part of this,” said McNair.

Even before the COVID-19 pandemic, McNair has been concerned about funding for salary increases. “We are lagging behind other educational institutions. If we’re going to keep high-level faculty, we’re going to need to pay them accordingly,” she says. Salary increases for faculty and staff is one of the top two issues she sees facing North Carolina community colleges right now. The other issue she sees is that community colleges need support for programs like the Guided Pathways Initiative that can get students trained and educated so they can go into the workforce. (For more information on these programs, go to https://www.pathwaysresources.org/.)

North Carolina’s community colleges are important to McNair because they offer an “extremely quality education at an extremely affordable price. The cost to attend community colleges is much lower compared to four-year colleges—and in some cases you can go right into the workforce with the training you need,” says McNair.

The pride McNair feels about Wayne Community College can easily be heard in her voice when she speaks about the school. She says that since the COVID-19 virus, she has been proud to see how everyone at the college is so prepared for this pandemic. McNair said the college has sanitized the facility and has plans in place to provide instruction remotely for students. She said they are discussing how the students who do not have internet access or computers can still receive instruction. She also said there are plans in place so that employees can work and be paid. McNair stated, “This took a lot of advance planning on the part of the administration under the leadership of our most capable president, Dr. Thomas Walker.”

Advancements McNair would like to see at the college include completing two building projects, one of which has already begun. Even in the middle of the COVID-19 pandemic, the school is making sure construction continues on its new automotive building (while being consistent with social distancing requirements, of course). The school also has plans for an advanced manufacturing center. This project has not yet begun. However, McNair is hopeful that work on that project will begin as soon as the automotive building is completed.

As with most, if not all community colleges, McNair would also like to see enrollment increase, as well as expansion of the early middle college. She would love for the colleges to offer different programs that include a lot of training for high school students, whom she believes greatly benefit from this program.

To any new trustees out there, McNair offers this advice: “Be like a sponge and soak up as much information as you can. Go to committee meetings, board meetings, and functions and be an advocate for [your] college.” To be able to make informed decisions, McNair suggests asking questions at committee meetings and getting college staff (including the president) to clarify items that need to be further explained.

When she is not attending to college business, McNair enjoys exercising. She also enjoys doing things for her husband, who is not physically able to help with some of the day-to-day operations of the house like cooking. Additionally, McNair enjoys traveling and music; she even sings and plays a little piano.

To unwind, McNair loves bargain shopping. She admits that she takes great satisfaction in competing for a good bargain, be it furniture or clothes. When she visits places outside of her Goldsboro home, she enjoys finding a great deal on something that she can remember that visit by. However, it must be “at a real good price!”

McNair’s best vacation ever was in 2015 when she and a group of high school students visited five European countries. This was her second visit to Europe; she had gone previously in 2008. However, she really enjoyed the 2015 trip because she was visiting places where she could not be reached by phone; nor could she reach others. She says the trip was the “thrill of her life.” McNair’s bucket list does not include visiting anywhere new, but rather she would like to learn to swim and to improve her piano playing.

The best advice McNair has ever received came from a college professor. She says that following this advice is critical to being a good leader. His advice was, “Separate the trivial many from the critical few.” McNair also appreciated advice shared by Ron Edmonds, an educator and researcher of essential qualities of effective schools. Edmonds’ advice was this: “We already know enough about how to effectively educate all children. The question is: Why so far we haven’t?” McNair likes this advice because it makes educators reflect on the practices used and consider if they have used all the available tools to help children learn.

A few things “The Main Thing Lady” is proud of include her career in education (which also included the little-known fact that McNair coauthored an article on new teacher training for a national journal on staff development) and the many lives she has touched during her career. Additionally, she is proud to be a member of Delta Kappa Gamma Society International, a professional honorary society of women educators.

McNair has been married to her pastor husband for almost 44 years. She has two grown children—a daughter and a son—and one grandchild.