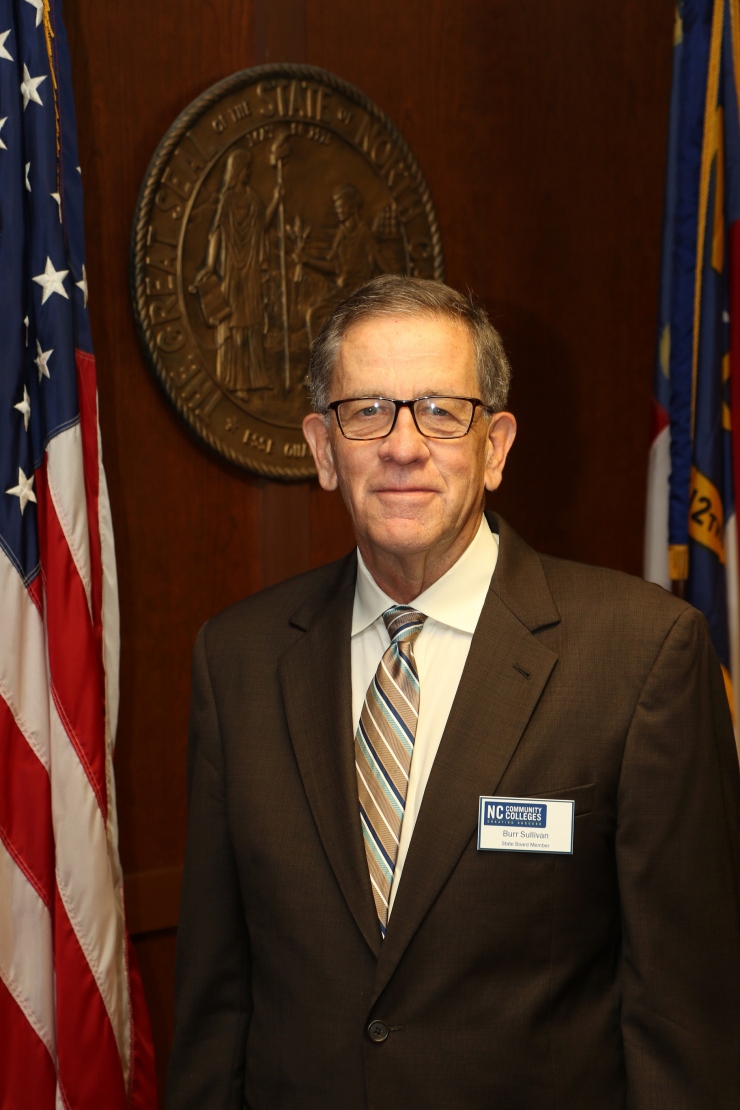 With a mind for business and a heart for education, Burr Sullivan has hit the ground running as the new Chairman of the State Board of Community Colleges.  He was elected Chairman in September for a two-year term, and he is optimistic about the opportunities that lie ahead for the System and its students.

A native of West Virginia, Sullivan graduated form Marshall University and became an Army officer in May 1968.  He served in Vietnam as an infantry platoon leader and then came to North Carolina where he earned an MBA at the University of North Carolina at Chapel Hill.  His was the sixth graduating class at UNC-CH’s MBA Program, now Kenan-Flagler.

His career led him to Lexington where he served as a division controller for Burlington Industries –one of the largest and most diversified manufacturers of textile products in the world.  He worked on the financial side of the company and then launched his own business venture in 1979 with the purchase of Dorsett Printing Corporation, which made packaging products for manufacturers in the Southeast, then around the country, and then all over the world as global markets opened.

Sullivan sold the company in 2007 and tried to retire, but says “that was the most boring six months of my life.”   Then, local business leaders came calling.  He was asked to lead the Lexington Area Chamber of Commerce to a better economic situation as it was struggling during the recession at that time.  He is credited with ultimately saving the Chamber in Lexington from closing its doors.  It took him two years to turn things around, but he stayed there six more years because he enjoyed building coalitions among business partners and liked working with young people.

He quickly discovered that one of the strongest business partners – and strongest economic drivers – in the Lexington area was Davidson County Community College (now Davidson-Davie Community College).    Under his leadership, the Chamber worked with the community college to determine the best customized training programs needed to optimize the success of larger businesses in the area.  He also directed other businesses to the Small Business Center, which Sullivan lauds as a key tool to helping smaller companies grow, thrive, and learn new skills.  Sullivan was recognized by Davidson-Davie CC with an honorary degree in May, 2021 for his 50 years of community service.

“Serving on the EIC was truly an eye-opening experience,” Sullivan said.  “It was amazing to see how community colleges were so important to new companies that were considering a move to the state.  In fact, that was the first question:  ‘Can your State deliver a trained workforce to my business?’   We heard that over and over.  And, ultimately, it’s the community colleges that enable North Carolina to deliver that trained workforce so that our state can recruit businesses and bring jobs to the state—-or help existing industries expand.”

As the new leader of the State Board of Community Colleges, one of his first priorities is to schedule regional meetings for individual State Board members  and senior staff to travel throughout North Carolina to engage local Trustees, Presidents and other community college leaders and  hear what they believe to be the System’s future priorities.

“We want to get input at these regional meetings to help us to develop a new  Strategic Plan for the System, which will begin in July 2022 and continue through July 2026,” Sullivan said.  “The State Board is a group of volunteers, like the local Boards of Trustees are volunteers.  We all come to the table wanting to help people and impact their lives in a positive way.”

More information will be distributed in the next few weeks about the regional meetings.  “We will be learning by listening and interacting” Sullivan said.  “The State Board wants to learn more about opportunities/challenges facing our colleges, and we want our colleges to learn more about our Board.     If we can all continue to work collaboratively for the same goals of supporting our colleges and our students, then I know that we can make a real difference – TOGETHER.”