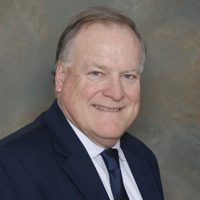 “Listen to learn,” and “Don’t be afraid to ask questions.” Those are the two pieces of advice Grayson Whitt, NCACCT’s Executive Board Secretary/Treasurer, would give to a new community college trustee. Considering Whitt has been a trustee at Rockingham Community College (RCC) for 17 years, he ought to know a thing or two about the protocol of being a trustee.

Whitt became involved with the community colleges when he was asked to serve on RCC’s foundation board, a position he enjoyed for the nine-year allowable limit. As a banker (now vice president/business development officer of First National Bank in Eden), serving on the foundation board seemed to be a natural fit. When he was appointed a trustee of the college, however, he was not familiar with the governance of the community college system. Learning how community colleges work was a big learning curve for him. Additionally, he quickly realized that the definition of a community college trustee was not “someone who meets with other trustees for one hour a month.” Being a trustee was more work than he had anticipated; the position was certainly more than just “ceremonial.”

Whitt has found state regulations to be the hardest part of being a trustee. For instance, it has surprised him how long a community college construction project can take due to the extensive requirements on publicly funded building projects. “That wouldn’t work in the private sector,” said Whitt.

Something he is most proud of about RCC is that they are trying to get a building under construction that would be solely dedicated to workforce development. The county has shown its support of this project by approving a 25-cent sales tax for this $20 million, 40,000 square-foot building. Whitt is hopeful the project will begin soon.

Outside of the community college and banking arenas, Whitt enjoys working out, which he does at least four days a week at 5:00 in the morning. He also likes to play golf and follow football and basketball at his alma mater, Elon University. As he puts it, his favorite way to relax is “very simple.” He likes to go to North Myrtle Beach, which he does regularly, and listen to good music and play golf.

When recalling his best vacation ever, Whitt said it was when his family took a trip to Key West, Florida. He, his wife, Connie, and two teenage (at the time) children enjoyed unwinding there. “It’s one of the most laid-back places I’ve ever been in my life,” said Whitt.

One thing Whitt would really like to check off his bucket list is seeing Elon University’s basketball team in the National Collegiate Athletic Association (NCAA) playoffs. Admitting that this bucket list item is “weird,” he commented, “I don’t need to go to Spain. I’m a simple person.” Whitt has had Elon basketball tickets for over 30 years.

Readers would probably be surprised to learn that Whitt is a former 9th grade biology teacher. Just out of college, he survived this undertaking for an entire day, after which he realized that teaching was not what he wanted to do for the rest of his life. As a teacher, he was hopeful he could also coach. However, the offer of becoming the assistant junior varsity basketball coach alongside his 9th grade biology teacher status was not enticing enough to keep him in the classroom.

Another likely unknown fact about Whitt is that he is a certified soccer referee (although he no longer actively referees). His son wanted to become a soccer referee, so they both became certified and refereed for weekend travel soccer teams.

Finally, Whitt says that he has not missed a home football game at Elon University in over 20 years. He says he would have attended more, but he knew attending his children’s sporting events as they grew up was more important. However, he did add, “I’ve probably missed a few weddings I should have gone to!”

Whitt is most proud of his family—his wife of 38 years, and his son and daughter, who are both college graduates. “I know it’s generic, but it’s true,” he says. Both of his children live in Greensboro. His son works in supply chain management, and his daughter is a second-grade teacher.