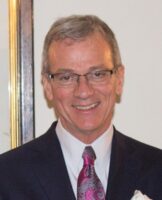 “Having a successful and vibrant community college…[is] one of the required building blocks for a county to move forward, just like a hospital, public schools, [a] healthy downtown, livability and amenities,” says Gene Rees, a 15-year trustee at Surry Community College (SCC). Following in his father’s footsteps, at least when it comes to community college involvement, Rees says his father had also served as a trustee at Surry from its earliest days. Similarly, both Gene and his father had close personal and professional relationships with college leadership, which helped build a special affection and love for Surry Community College and the work it does.

Rees is a second-generation clothing store owner, has an industrial uniform laundry business and is involved in historic preservation redevelopment. He says he looks at community colleges through the eyes of a business owner. According to Rees, SCC’s efforts to produce well-trained, successful professionals has paid off, which Rees knows first-hand after having hired at least a dozen SCC accounting majors over the years. Most all of those he hired went on to get their CPA or other, more-advanced training. Rees says other employers could say the same for jobs in nursing, mechatronics, welding, viticulture/enology, etc. Surry Community College produces well-trained graduates and certificate holders. “Our businesses would not survive or would have to relocate without the SCC employee-training pipeline,” said Rees.

As an SCC trustee, Rees has been impressed how a board of 15 trustees, each with very different life experiences and skill sets, as well as different political persuasions, can work together as one.  “It’s what makes a great board and a great college,” says Rees, which is something he feels they have at Surry Community College. He went on to say, “We all understand that our role as trustee requires a single-minded focus on what is best for the students, and we each try to bring our individual skills to help in that regard.”

Rees is clearly appreciative of the SCC faculty and staff. He is very proud of their president, Dr. David Shockley, and his entire leadership team, and like so many of his fellow NCACCT Executive Board members have said, he is equally proud of the groundskeepers and the facilities, food service and security staff. “These folks are unheralded,” he said, “but they make Surry Community look good and enticing for prospective students every day of the year. They are the unsung heroes at our school.”

Rees wants SCC to continue to reach more people and to be included in every dinner table discussion about improving one’s personal or professional life. To a large degree, he believes this narrative will determine Surry Community Colleges’ future success and growth, as well as the economic growth of the community. Rees jokes that he still has chats with Dr. Shockley that they need a campus in Mount Airy, which is where most of the county’s residents live but is geographically located in the corner of the county. Logistically, he says it is challenging to operate multiple locations, but the question remains, as it does at numerous North Carolina community colleges: How do we make the college most convenient for most of our population?

His advice to new trustees is this: Attend as many state and national meetings and seminars as you can, and listen a lot during the first few meetings. He says it is important to “place great value” on board dynamics, to respect fellow trustees, and to be cordial and respectful to your college president and staff. A sense of humor is important, as well as “bringing in a big dose of trustee humility to each meeting,” he says. Lastly, Rees says, “Remember that board dysfunction equals college dysfunction.”

During the pandemic, Rees wants to remind new trustees that once meetings are in person, being a trustee will be a lot more fun. “We have all done the Zoom and phone meetings, and they are a poor substitute for the face-to-face meetings, but we have to do them,” he says. But he says to be patient until the in-person meetings begin again. Rees is thankful that SCC’s board recently had its first in-person meeting in the school’s huge viticulture center. The trustees across from him looked really small because they were about 70 feet away, but Rees said it was great to be able to at least see each other in person.

Two challenges Rees believes NC community colleges have to contend with right now are relevance and preservation of the smallest community colleges in our most rural counties. On the subject of relevance, Rees asked several questions concerning continuing education like, “How can we design a certificate or degree program that perfectly overlays job opportunities in our community? Are our classes tailored well enough for out-of-the-gate student success in the job market? Do we supplement con-ed programs with necessary soft skills with things like how to interview, punctuality, workplace professionalism, customer/client/patient focus?” Academically, Rees stated that even with the articulation agreements in place between the community college and university systems, our academic rigor must equal or exceed the four-year schools. “We know our transfer students hold a higher GPA and have a higher graduation rate than the conventional university students, but the community college stigma will only go away when our academic rigor is widely perceived to equal that of the university system,” he says. Additionally, he says community colleges cannot just be less expensive; they must be on academic parity with the university system.

Regarding preserving the smallest community colleges in our most rural counties, Rees notes that it is a well-known fact our state has numerous small colleges in which the full-time equivalent (FTE) is costly, and some would say, inefficient. From a statewide or systemwide point of view, some think it makes economic sense to consolidate some of the smallest schools to larger, neighboring schools. However, Rees says the economic viability of these small towns is inextricably linked to the presence of a healthy community college. As he puts it, these small-town community colleges are an “economic lifeline to our smallest communities.” This is a matter that Rees believes needs thoughtful study and consideration.

Outside of work and his community college involvement, Rees likes to play at charity golf tournaments a few times a year. He says he grew up near a golf course and was relatively good at it until he was about 12 years old, at which point he “continued to get worse” until he all but gave it up around the age of 35. Additionally, until a couple of years ago, he was a very active distance runner. However, a knee injury shifted his running to biking around the mountains near Mount Airy. Rees also has an affinity for snow skiing. “Every vacation is the best vacation,” he says. However, the best part of a vacation for him is when he gets to walk up a snow-covered, knife-edge ridge at 13,000 feet or so on a clear day, strapping on his skis and heading down untouched snow. He also says that while he has seen many beautiful places all over the world, he never tires of driving along the New River in Alleghany County, especially in the fall.

Rees says he really does not have a bucket list. After some health issues a few years ago, he said he contemplated one. However, he realized he wanted to do what he had been doing up until that point in his life, which was working hard, making new friends and making a difference in their little community. Rees says he is pretty content.

There are two things of which Rees is truly proud. The first is his wife, to whom he has been married for 20 years. The second is his historic preservation redevelopment work, particularly in Mount Airy. He is proud to have been able to play a small role in the economic vitality of Mount Airy for the next generation.

A few things you may be surprised to learn about Rees are: 1) If you happen to be shorter than him, you wouldn’t know that he is “pretty bald on top.” 2) His wife has eight cats, and 3) He’s never taken a single puff from a cigarette.

Finally, when asked what the best advice he has ever received was, Rees said, “Understand the concept of compound interest at a very young age.” Prudent advice from a great businessman.