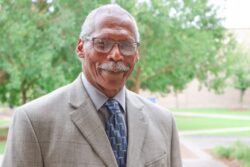 Dr. Ted Thomas is a man who practices what he preaches, both literally and figuratively. Pastor of First Missionary Baptist Church in Warsaw, North Carolina, Thomas has been a lifelong learner himself. “You are never too old to learn,” he says.

As a trustee, Thomas has realized the importance of SCC and the community colleges as a whole. He has discovered that “the purpose of the trustee is to make sure the ship is going in the right direction,” he said. “There is work involved when you are a trustee if you want the college to succeed. You don’t want to just occupy a seat.” Part of the success of SCC’s Board of Trustees, says Thomas, is that their trustees do not allow politics to govern their decisions. “We try to do the best for the students and try to be a landmark in the community that we serve,” said Thomas.

Thomas also stresses the importance of new trustees to be involved. “Attend workshops and seminars,” he said. “I learned so much when I was a new trustee at those types of things.” One thing he, himself, was surprised to learn about when he was a new trustee was about funding. He said he kept hearing the acronym “FTE,” but did not know what it meant. (It means full-time equivalent.) He later asked about it and learned that community college funding is based on student enrollment and how many FTEs a school has. “That was an eye opener for me,” says Thomas. FTEs are at the forefront of all community colleges, which is why it is important to have good programs at our schools so students want to attend, said Thomas.

For those who do not want to attend a four-year college, Thomas says the community colleges can provide training for important vocations that pay well and that will allow people to provide for their families. A good example of one of these vocations is truck driving. If the truck drivers go on strike, says Thomas, “Your Amazon package would not get there!”

In considering the community college system as a whole, Thomas believes that the colleges work well together. However, he says that sometimes colleges seem to be in competition with one another, especially community colleges that neighbor one another. “We must work with the statewide community in order to be as strong as we can,” says Thomas. “It’s always better to work together than against each other.”

Thomas says the challenges SCC faces are the same challenges all other community colleges face—the need for enrollment increases as well as salary increases for staff and faculty. Thomas said he would like to get older adults who may have previously taken classes at SCC back into the classrooms to finish what they have started. He also realizes that Sampson County is a large county, which can create transportation challenges for some. He suggests that SCC partner with the county to help provide transportation for the students. He says we need to ensure we do not lose students to other educational entities.

Thomas is also particularly concerned with the decrease in minority male enrollment at SCC as well as across the state. He says that SCC is looking at this issue and is trying to devise a solution. He thinks the schools need to be more visible in their counties and should consider social media to attract minority males.

At SCC, Thomas is most proud of how well the school works for its students. “We are all family, and families work together,” says Thomas. Thomas says that trustees want feedback from the staff, faculty and students about how they can improve the school. Thomas says that, “Relationships are the key to everything.”

Aside from being a trustee, Thomas maintains a full and active life. A 1975 graduate of North Carolina Central University, Thomas continued his education at Meharry Medical College in Nashville, Tennessee, where he received a degree in Medical Technology. After realizing he did not want to spend the rest of his days in a lab, he planned to take a year off from school. Wise counsel from his mother encouraged him not to take off that year, but instead, continue his education. That prompted him to apply to and complete dental school. After dental school, he served in the Navy for three years as a dental officer stationed at Camp Lejeune. He then moved to Clinton in 1983, where he practiced dentistry until 2019.

Prior to his retirement in dentistry, however, after receiving the call to go into ministry in 2006 and after attending Shaw Divinity School, he became the pastor of First Baptist Missionary Church in Warsaw, where he continues to serve. Living out the phrase, “You’re never too old to learn,” Thomas completed his Master of Arts in Biblical and Theological Studies at Knox Theological Seminary in May 2022. Thomas had no desire to let his learning end there, however. He is now enrolled in the doctoral of ministry program at Regent University at Virginia Beach and should complete that degree in three to four years.

Thomas’s hobbies include walking, racquetball, reading, riding bikes, hiking and chess. A little-known fact about Thomas is that about 20 years ago, he almost reached 300 lbs. He now works out about four to five days a week and is careful about what he eats.

Unsure if this will ever occur, Thomas has an interesting item on his bucket list that relates to a hobby he enjoyed for 18 years—piloting a plane. Thomas says he would love to fly through the eye of a hurricane.

Although Dr. Ted Thomas is quite an accomplished gentleman himself, he said his proudest accomplishment is his family and the tight bond they have. And while he knows his family understood why he was not home more during his two boys’ younger years while he was working to get his dental practice off the ground, he said that would be a portion of his life he would relive if he could.

Thomas is also quite proud of his congregation at First Missionary Baptist Church and being a part of SCC and what the college has done for the community. “Do what is right and don’t do it for personal gain,” says Thomas—a statement he seems to have made his mantra.