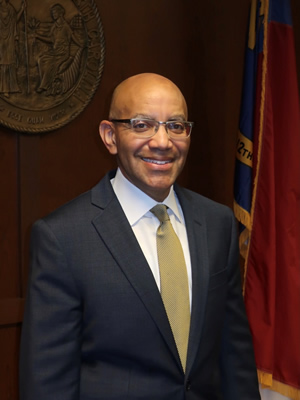 Whether leading the U.S. Small Business Administration’s response to COVID-19 in North Carolina, serving as a local councilman and entrepreneur, directing a program focused on improving eastern North Carolina economies, or serving alongside a North Carolina governor – Thomas Stith has specifically chosen professional opportunities that improve the lives of others.  Now, as President of the North Carolina Community College System, Stith says his current role allows him to continue that life of service while strongly advocating for educational opportunities and driving economic growth in the state he loves.

Since he took the helm as the System President in January, North Carolina has navigated a pandemic while quickly pivoting in order to rebuild small businesses and draw in big businesses and jobs.  For example, he mentions Toyota’s recent announcement that the company will open a lithium battery plant at the Greensboro-Randolph Megasite, which is expected to lead to the creation of 1,750 jobs.

“While incentives matter, the number one reason Toyota selected the site in Randolph County is because of the workforce,” Stith said.  “Our community colleges are fueling the job engine in North Carolina and are the key reasons businesses are expanding and locating here.”

Stith has more than three decades of experience in economic development and government relations.  He was chief executive of several businesses and consulting firms, including the Michael Thomas Group in Durham and LJP Lab, a toxicology lab and health care consulting company in Kernersville.

He served as chief of staff to former Gov. Pat McCrory from 2013-2017 and was a three-term city council member in Durham from 1999-2007.  During his time in the Governor’s Office, he led special initiatives, including the establishment of the Venture Capital Multiplier Fund (a $60 million venture fund), the Governor’s initiative on historically black colleges and universities and Hurricane Matthew recovery.

Stith’s political acumen helped him navigate one of the longest “long” sessions in North Carolina history as he had to hit the ground running to advocate on behalf of the NC Community College’s systemwide legislative priorities.  Ultimately, the System received a final biennial budget of $1.46 billion – the largest received in more than a decade.

“Lawmakers heard from our entire community college family – the State Board and System Office, along with the local Presidents and the Trustees,” Stith said.  “That consistent message and that unified voice made a big difference for our legislative agenda.”

He continues: “This biennial budget reflects the critical and long-term role that the Community College System serves in our higher education and economic development ecosystems,” Stith said. “The appropriated State funds will help our community colleges to continue their mission of maximizing student success by providing the support, training and education needed for high-quality, high-demand, high-skilled, and high-wage careers.”

Stith looks forward to the System building on that momentum as the community college partners develop a three-year legislative strategy.   Part of that strategy will be a continued request for additional salary increases for faculty and staff.

“We are currently in the process of asking colleges for specific information about how they are having difficulty recruiting and retaining qualified people to work on their campuses,” he said.  “Our people are our greatest resource and we can only serve students when we have the faculty and staff to support them.”

While he has walked the halls of the General Assembly, talked to the state’s policy and business leaders, and represented the System in a variety of business and educational forums, Stith says he is most inspired when he visits the community college campuses.  Today, he announced to the State Board that he has now visited all 58 colleges.

“I have been afforded the opportunity to serve as the President of the North Carolina Community College System,” Stith said.  “I am grounded in my faith.  This job is not just professional – it’s personal, and I have been blessed with this opportunity.    Many roads have led me to this point, and I will never take it for granted.  I will work hard every day to ensure that our students get what they need and deserve to be successful.”